Posted on December 6, 2012 by robinbirkel 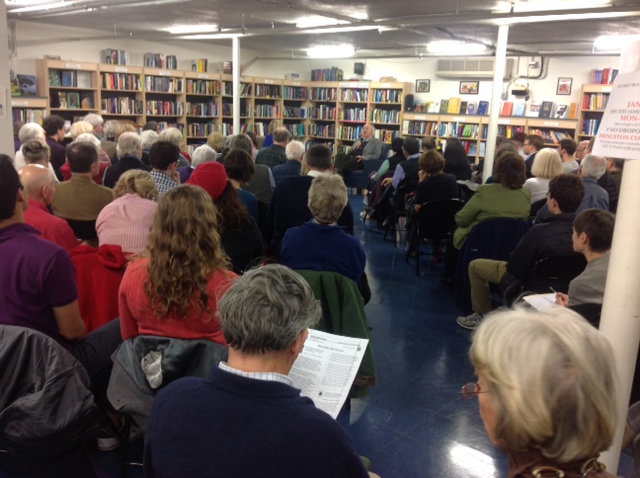 Diversity is much prized by some Christian congregations, but in recent history it hasn’t always been this way. Churches have been historically the most segregated, divisive groups in America. But in Rome in the period of late antiquity, in the period from the 2nd to the 8th centuries, says Peter Brown, the church promoted the value of diversity.

In a conversation between Brown and Elaine Pagels at Labyrinth Bookstore on Wednesday night. Brown and Pagels discussed Brown’s new Through the Eye of a Needle: Wealth, the Fall of Rome, and the Making of Christianity in the West, published by Princeton University Press. Brown cautioned against “pauperizing” the poor, thinking of poor people as … simply … poor.

Quickly scanning his book, I found Brown’s observation that, in the Hebrew tradition, the poor were not merely beggars: They came to the rich and religious leaders to seek justice and protection. Brown writes (page 77) that the early Christian church viewed the poor, not as ‘the others” but as “our brothers.” (Ironically that is even more true today now that folks who thought they could live in comfort now find themselves in foreclosures. In Princeton there are hidden pockets of need in the most affluent-seeming homes.)

Brown writes (page 87) that wealthy people “valued in the churches a certain lowering of the sense of hierarchy and a slowing down of the pace of competition.” (Just two days before, this is what Roberto Schiraldi seemed to be calling for, when he led a Not in Our Town discussion on the values of “white privilege” at the Princeton Public Library.)

Continues Brown, “Members of the rich often came to the church so as to find there a social urban lung.” That term, social urban lung, describes a place like the Princeton Public Library, which harbored refugees from the power outage, some poor, some wealthy, all equal as they needed warmth and plug-ins. It also describes the house of worship where people can drop their pretensions or inadequacies and “love their neighbor as themselves.’

It  has resonance to see what I see happening in my own church, where at the very hour Peter Brown was speaking, the Cornerstone Community Kitchen was serving dinner to a wide variety of people — some who needed the food, some who just wanted to mingle, some who just wanted to “give back” by helping. The good part is, you don’t need to know — and it isn’t visible  — to which group a person belongs.

P.S. Come out some Wednesday for the free meal, served in partnership with the Trenton Area Soup Kitchen but definitely not in a soup kitchen atmosphere. You are served by volunteers at an elegantly dressed table (at right), and the meal includes fresh vegetables, salad, and dessert, and there’s even a piano player. It’s every Wednesday, 5 to 6:30, at the Methodist church at the corner of Nassau and Vandeventer, all welcome.