For Black History Month (February), the Capital District Antiracism Team, of which I am a part, has created an Antiracist Daily Devotional. Each day there will be scripture, images, readings, a prayer, and action steps meant to encourage and challenge us as we continue to address structural racism and the ever-present stain of white supremacy. You are receiving the first of 28 devotionals today, but we won’t send more unless you tell us you want us to. If you are interested in receiving these every day, please email Tyler@princetonumc.org. 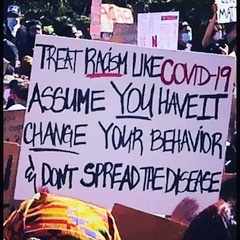 In Matthew 5:33-37 Jesus says “[Y]ou have heard that it was said to those of ancient times, ‘You shall not swear falsely, but carry out the vows you have made to the Lord.’ But I say to you, do not swear at all…Let your word be ‘Yes, Yes’ or ‘No, No’; anything more than this comes from the evil one.”

Ibram X. Kendi, the son of, not one, but two Methodist pastors, puts it differently but calls us to the same ferocious honesty in How to be an Antiracist: “What’s the problem with being ‘not racist”? It is a claim that signifies neutrality: “I am not a racist, but neither am I aggressively against racism.” But there is no neutrality in the racism struggle. The opposite of “racist” isn’t “not racist.” It is “antiracist.” What’s the difference? One endorses either the idea of a racial hierarchy, as a racist, or racial equality, as an antiracist. One either believes problems are rooted in groups of people, as a racist, or locates the roots of problems in power and policies, as an antiracist. One either allows racial inequities to persevere, as a racist, or confronts racial inequities, as an antiracist. There is no in-between safe space of “not racist.” The claim of “not racist” neutrality is a mask for racism.”
As leaders we must have a firm positionality on race and racism. Too often we answer “no” to the question “am I racist?”, without examining our deepest truth. Am I a racist? The answer is “yes” when I do racism or when I ignore the Biblical call to oppose racism and to dismantle it no matter the cost to me personally or the church corporately. There are few places in 21st c church life where the command to let our word be yes when it is yes and no where it is no is more urgent.

Action step: Today, with brutal honesty, identify an instance of either active or passive racism in your living. Look at the media you consume, your approach Christianity, and the art you consume and do so without guilt or shame. Then let your mind and heart sit with the observation. Give the Holy Spirit of God an opportunity to convict your heart.

Prayer: A Prayer for Guidance from “The Book  Of Common Prayer”

God, by whom the meek are guided in judgment, and light rises up in darkness for the godly: Grant us, in all our doubts and uncertainties, the grace to ask what you would have us to do, that the Spirit of wisdom may save us from all false choices, and that in your light we may see light, and in your straight path may not stumble; through Jesus Christ our Lord. Amen.