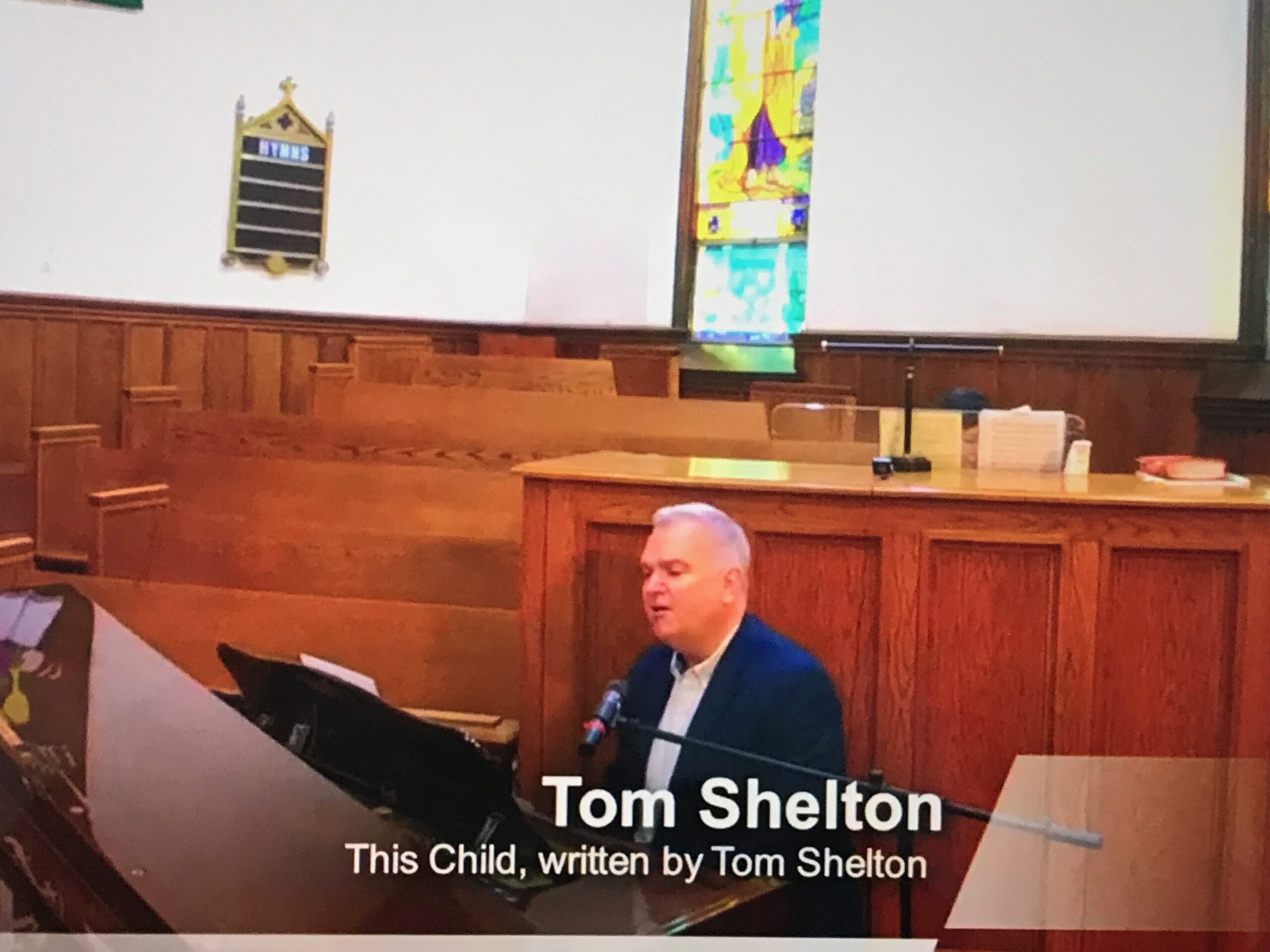 Tom Shelton, music director of children’s and youth choirs at PUMC, wrote the hymn “This Child” and composed its music.

The lyrics of this Christmas song makes it suitable for release during the Coronavirus pandemic. Says Tom: “The verses represent what many of us have felt during this period of isolation. We have to keep our faith and believe in This Child.”

Here are the lyrics of the chorus:

“Where do I run, where can I hide,

When the world comes crashing down.

Where can I turn, who do I call,

When there’s no one else around.

I turn to you; I call on my faith,

And the promise delivered that night –

Shelton played and sang “This Child” during worship on Sunday, September 13, 2020, as the children’s and youth choirs resumed their activities this week, meeting virtually (mostly).

This year, as on every Good Friday in the last decades, Hyosang Park, Princeton UMC’s music director, planned to observe the day by presenting a requiem, a musical    composition in honor of the agony and death of Jesus Christ. Choir members enthusiastically responded to a question about what this concert means to them. Just to participate in the celebration of Holy Week was important for Edwin Francisco. “It is always moving and exciting,” according to Bill Suits.

“It’s meaningful that some of our concerts were dedicated to members who had passed on,” said Karen Hoagland.

The lyrics of a requiem, said Christine Wong, “encompass major themes of the Bible: the covenant of salvation from Abraham to his descendants; God’s wrath and judgment; and man’s fear and suffocation for deliverance from sins and death. It abundantly praises God’s holiness and highness.”

Plans for the Good Friday have changed (Princeton UMC will have a virtual service at 6 p.m.) and choir rehearsals are now virtual, but – singers — here’s an innovative way to get the Holy Week music experience.’ Choose your favorite score, find the youtube video, and – sing along!

Joan Nuse would likely pick the requiem by living British composer Bob Chilcott. “It was an amazing experience. The songs were uplifting!”

Lori Pantaleo’s favorites include the one requiem by John Rutter. The most difficult, she said, came from France, by Maurice Durufle (1947) and Luigi Cherubini, who wrote his Requiem in c minor in 1816 to honor Louis XVI.  Other works in the Good Friday series were the “Seven Last Words” by Theodore Dubois in 1867, Faure’s Requiem (1890), Johann Sebastian Bach, Cantata 21, Anton Bruckner’s Requiem in d minor, Handel’s Messiah, and the 1837 Requiem in C minor by Michael Haydn.

Here is one video of the Seven Last Words, by Dubois and here is a version that is part of a Good Friday service from Katy, Texas.

This video of Bach’s Cantata 21 and this one of the Cherubini  even come with sheet music!

This beautiful version of the John Rutter Requiem was dedicated to  the tragedy at Emmanuel AME church in Charleston, South Carolina.

No matter what is on the program, or whether worshippers are present or online, Jenni Collins says she will look forward to “the intimate nature and the powerful emotion of a Good Friday service.” 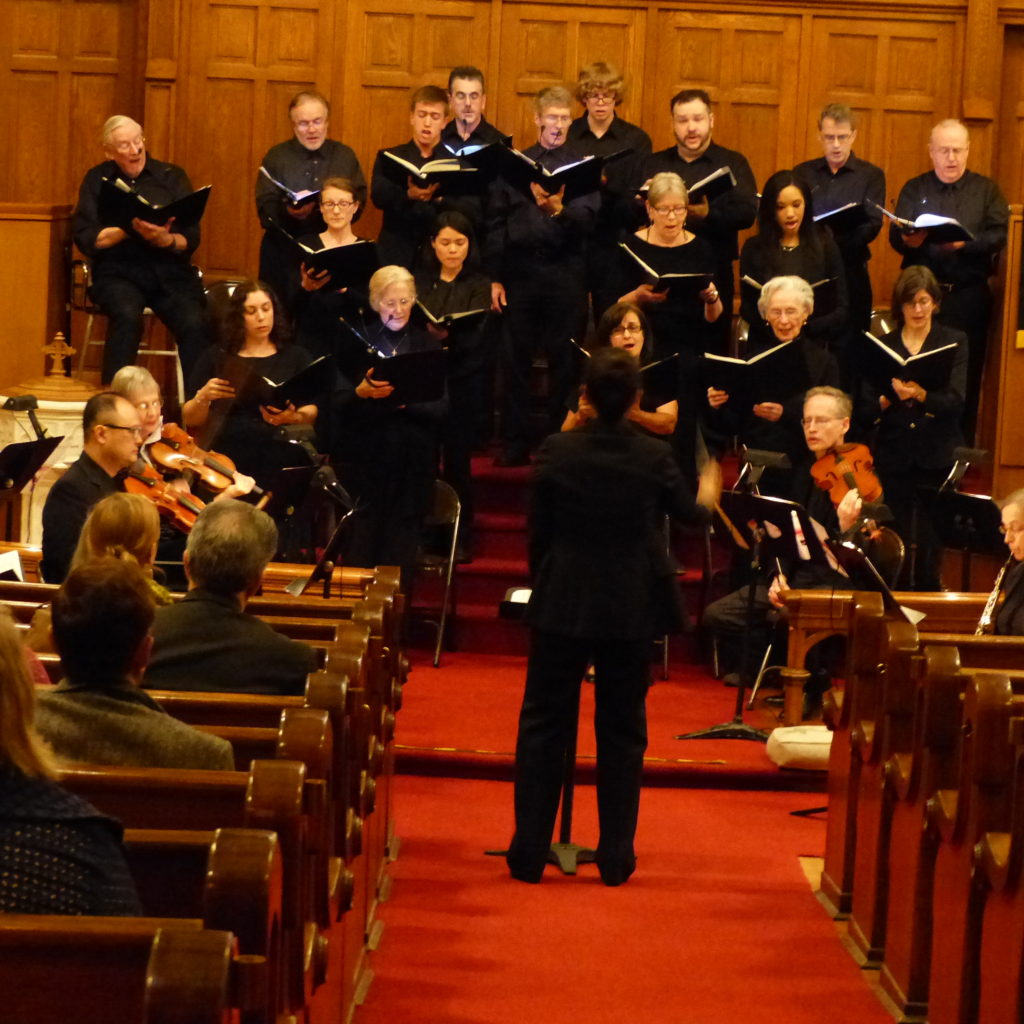 Joyful music begins the Easter season at Princeton United Methodist Church  on Palm Sunday, April 9, at the 9:30 and 11 a.m. services. Tom Shelton directs the children’s choir at the 9:30 service.

For Holy Thursday Communion, April 13, at 7:30 p.m., a sextet will sing works by Byrd, Lassus, and Victoria. On Good Friday, an excerpt from Pergolesi’s “Stabat Mater” will be sung at the noon service, and Hyosang Park will direct Anton Bruckner’s Requiem with soloists, choir, and chamber ensemble at 7:30 p.m.

Easter Sunday, April 16, begins with a sunrise service at 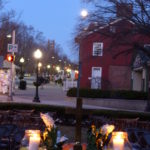 6:30 a.m. on the lawn, followed by a continental breakfast. At 9:30 and 11 a.m. traditional Services of the Resurrection feature the Chancel and Handbell Choirs and a brass quartet.

On April 23, Tom Shelton directs the Children’s Choirs in “The Tale of the Three Trees” musical at the 9:30 and 11 a.m. service and Christopher McWilliams presents a free organ concert “This Joyful Eastertide” at 2 p.m. An offering will be taken.

On April 30, Communiversity Sunday, Tom Shelton directs the Youth Choir in a musical at 9:30 a.m. There is no 11 a.m. service that day, but at 2 p.m. the children and youth present their musicals inside the sanctuary.

As composer Nico Muhly says, church choir singing is  “meant for worship…to be heard in a state of quiet meditation.. to guide the mind out of the building into unseen heights and depths.”

On Youth Sunday, February 8 at 9:30, choirs from three churches will praise the Lord. Our PUMC youth choir rehearsed with singers from Trinity Episcopal and Nassau Presbyterian, and these combined choirs visited the other two churches on January 25. Now we get to hear them! They will sing Cherubini’s “Like as a Father,” a traditional Zambian song, “Bonse Aba,” and “One Voice.”

Below are some snaps taken at rehearsal and on the 25th. Praising the Lord on Sunday! 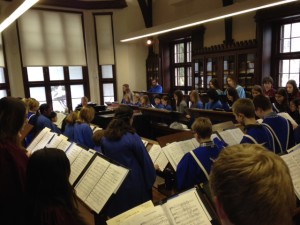 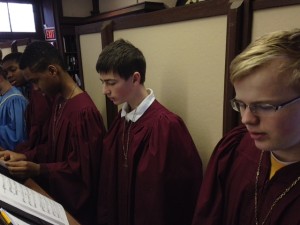 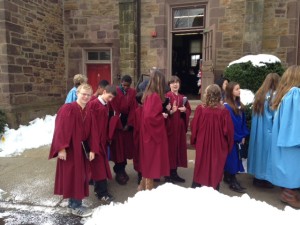 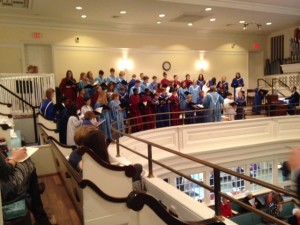 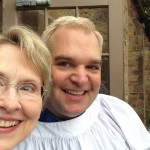