Skip to content
“I will not submit to be charged with praying, nor do I accept the righteousness of the some 60 charges laid against those participating in the Moral Monday protests during Ferguson October,” said Reverend Osagyefo Sekou, pleading not guilty last December at Ferguson. “The only signs of Assault, Disorderly Conduct and Disturbance of the Peace I saw that morning clearly came from the garrison of riot police protecting the state citadel from a group of singing, 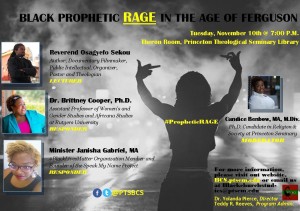 praying, peaceful clergy, seminarians and members of the community.”
He will speak at a conference organized by The Center for Black Church Studies at Princeton Seminary, “Black Prophetic Rage in the Age of Ferguson,” on Tuesday, November 10th at 7 pm in the Theron Room at the Princeton Seminary Library. Yolanda Pierce directs the center. The roster also includes Dr. Brittney Cooper, Ph.D. and Minister Janisha Gabriel, MA, responders, and Candice Benbow, MA, M.Div., Moderator. Yolanda Pierce directs the center.