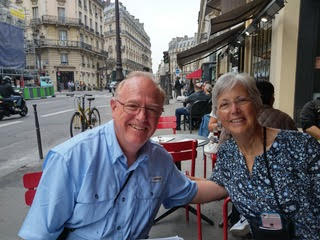 After being very active at PrincetonUMC, including in the bellchoir (see photo below) Jeff and Annette Ransom moved to Sun City, Texas in 2016. Here is their update! Their new address is 329 Old Blue Mountain Lane, Georgetown, TX. They have had two more grandchildren for a total of eight, living in Massachusetts, upstate New York, and Texas.

Past What persons/activities/tasks/committees at PUMC built up our faith?  Everything we tried, did, almost did, and loved made us better disciples for Jesus Christ.  Until that point in our lives over 25 years ago, Sunday church was a  family tradition where good people went to show that they were, or at least it had become something close to that, speaking for me only (Jeff).  Annette, the trained church organist and consummate church office admin had not drifted so far away, but we were challenged with raising teens and sending them to college, and the east coast work environment, ever-demanding more time away from family.  Choir was always the first escape to avoid other things at all our church families, but Sunday School classes and Disciple Studies laid important foundations along the way, yet there were more gentle proddings into many “firsts” for us by the dedicated saints at PUMC who helped us to grow.

Highlights include Natural Church Development, SPR, Cornerstone Kitchen, Don Brash’s Class and the Lay Leader role, as well as the music and choirs.  Many people encouraged us along the way: Jana, Catherine, Hyosang, Iona, Larry, Susan, LaVerna, Christopher, Chris, Tracey, Ed, Judy, Doug, Peggy, Yvonne, John, Pat, Michelle, George and Barbara, Mary Lib, Lori, and several more no longer there, but not wanting to overlook any others and the many friends we knew from this congregation.  On a more personal level, I do very much miss the finest golfing gentlemen, George and John, I have ever played with, prowess on the course aside and unimportant.  NJ was a tough leave all around.

What is your current situation? We’re fully retired, professionally speaking, but not “retiring” from an active, spirit-filled life.  We’re members at the FUMC-Round Rock (TX), a friendly, large multi-generational congregation (unlike PUMC, this is a largely white, though a moderately affluent group), very mission active in local and regional efforts.  For example, there is still a monthly gulf-coast rebuilding team for Hurricane Harvey recovery, and a sponsored engagement with a local elementary school for weekend (now everyday) food support of families, and the church just completed making over 200 beds for the “No Child Sleeps on the Floor” project. Click here for more of Jeff’s letter.

C. S. Lewis already commented on our present situation over 70 years ago (sort of)?  After pointing out that humanity had always lived under various threats to existence through out our history (wars, plagues, raiders, illnesses, air raids, accidents), “this” would be nothing new, referring to the threat of the atom bomb.  By extension today we only need to replace that term with the coronavirus. …. It is perfectly ridiculous to go about whimpering and drawing long faces because . . (we) have added one more chance of painful and premature death to a world which already bristled with such chances and in which death itself was not a chance at all, but a certainty.” click here for more…

Along with NT Wright, Donald Brash, and others studied while at PUMC, we have established an enduring legacy of faith previously unexplored.  Or perhaps, led by the (Ecclesiastes) Spirit, it was a time to know, and a readiness to receive.