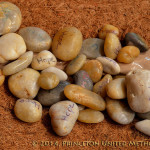 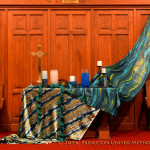 The Landscape of Lent: Water

A Sermon by Jana Purkis-Brash

Jana’s topic was the story in John 4: 5-42 about the Samarian woman at the well. For the complete sermon, click here.

Her conclusion:  Over and over again Jesus defied the rigid boundaries imposed by the religious and social leaders of his time. You can look at some of what he did in a contemporary context, and some of it will bother you and maybe even make you angry, as it did the Pharisees and Sadducees.

If Jesus were physically present today,

Jesus is alive today. And we are his body. We are his presence. We are called to have his mind, and to act as best we are able to discern as Jesus would. To ask and take seriously the question of what would Jesus do in our time moves us well beyond the wristbands that were popular years ago and into the often uncomfortable and sometimes socially unacceptable places where we acknowledge that all people of all nations, all cultures, all religions, all genders, all ages, all races, all sexual orientations, all incomes, all accomplishments and all sins are God’s own children and our sisters a 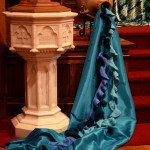 And that, my dear friends in Christ, is the most significant witness of all… the one you make. Drink deeply of the living water that Christ offers and share that life giving water with others who need it so badly. 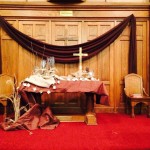 (The altar was designed for this service by Debbie Meola).