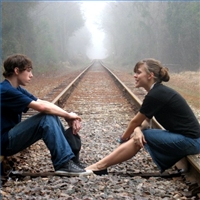 There was a man who spent his days at the homeless shelter in the heart of a city serving meals to those who came to seek shelter.  He not only served the food, but also liked to move through the cafeteria and strike up conversations with the guests while they ate.

One day, the man sat down beside a woman he had never seen before and began to speak with her. The woman immediately felt very comfortable with the man and opened up to him about her life and the terrible state in which she currently found herself. The man listened very intently to what she was saying and offered no judgement, only a sympathetic ear.

After the mealtime was over, the woman made her way to the door and thanked the man for listening.  The man smiled and invited her to come back whenever she was in need.  So, for the next three days, the woman came back to the shelter, enjoyed a hot meal and a nice conversation with the man.

On the evening of that fourth day, the man discovered that his wallet was missing.  He tried to retrace his steps from the day, but could not recall where he had last seen it.  He reported the loss to the supervisor of the shelter, and all but gave up on the idea that he would ever see it recovered.

The next morning, the supervisor called the man into his office.  When the man entered, he saw, sitting in one of the two chairs beside the supervisor’s desk, the woman whom he had befriended at the beginning of the week.

“Well, hello,” said the man.  “What brings you in here and at this time of day.”

The supervisor sat behind his desk and let the woman speak up for herself.

“I’m here because I felt terrible, ” she confessed.

“Whatever for?” asked the man, sitting down next to her in the other chair.

“I stole your wallet yesterday afternoon while we were sitting together at lunch.  You laid it down on the table, and while we were talking, I took it and put it in my coat.  You never even noticed.”

“Ok,” said the man, surprised at the honest confession.  “So, what brought you back?”

“After I had gotten away clean, I started to think about how easy it had been to lift the wallet from you.  I realized that the reason it was so simple was that you didn’t notice because you were listening to me so intently.  I had never had anyone so interested in what I had to say before.  I knew then that I could never live with myself if I kept it, so I brought it back to your supervisor.  I’m very sorry.”

The supervisor looked at the woman and then said to the man, “I’m not surprised at all, you know.  I knew this would happen to you.  You never pay close enough attention to what the guests are doing.  You’re too wrapped up in what they’re saying to guard against theft.  What am I going to do with you?”

“You’re right,” said the man.  “I’m surprised it’s taken this long.”  Then, looking forgivingly at the woman, he said, “Thank you for returning my wallet to me, and I accept your apology.  I hope you will stay and enjoy another meal with us today.”

“I’d love to stay, but please don’t fire this man,” pleaded the woman to the supervisor.  “Who would  ever listen to me like he does?”

“Fire him?” asked the supervisor, surprised by the very notion.  “I wish I had 50 more employees like him!  People try to steal things from our staff all the time, but never once has anyone gotten away with it and come back to return what they’ve taken.  Besides, if I fire him, who would ever listen to me like he does?”