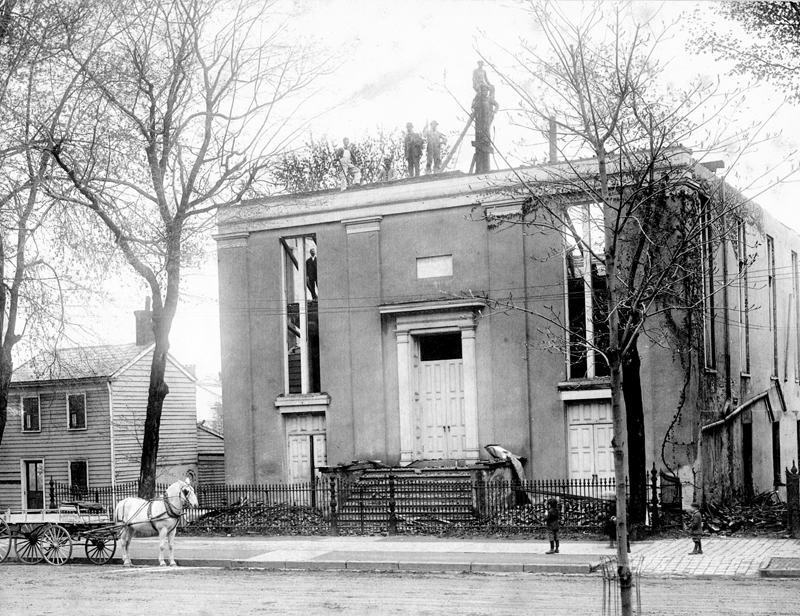 This is the eleventh in a series of excerpts from “A Journey of Faith for 150 years: A history of the Princeton United Methodist Church” by Ruth L. Woodward, Copyright 1997.

In 1909 Reverend William Moffett announced that he had secured a pledge of $10,000 from Charles H. Sanford, given in memory of his late parents.

Charles Sanford, who had residences in Freehold, New Jersey, and London, England, was a Presbyterian, a member of Old Tennent Church in Freehold. Moffett secured Sanford’s interest by reminding him that he had once been his father’s pastor.

Once interested, Sanford became deeply involved with the building project. His original gift of $10,000 was designated for the construction of the bell tower and his wife donated the peal of bells, one of which is inscribed with her name.

The beautiful triple window depicting Christ blessing the children that faces Vandeventer Avenue, was given in memory of Sanford’s daughter, Ettie Sanford Porter. The windows in the Vandeventer Avenue entryway were given by his daughter Sarita and by his second wife. The Sanford-Davis Room next to the sanctuary honors Charles H. Sanford and B. Woodhull Davis, an active and faithful member of the church.

Charles Sanford, the son of a country doctor, had been sent to Cuba as a teenager in order to learn Spanish. He later returned to Cuba with his wife as a representative of an American firm. He traveled extensively in Central America and at the age of twenty-five was invited to join an American bank in Argentina.

The Republic of Argentina was still quite young and Sanford arrived on the scene as a banker in time to help finance the growth of both the country and the city of Buenos Aires, which was little more than a village when he arrived. He accumulated a vast fortune in the process, owning thousands of acres in the city. He was noted for his philanthropy in Buenos Aires, especially as the founder of a home for children. Able to retire at an early age, he spent most of his time in London, with several months of each year in Freehold.

With the generous gifts of Pyne and Sanford secured, a Building committee was appointed, which awarded a contract to William R. Matthews of Matthews Constructon Company of Princeton. Work was to proceed immediately and the price agreed upon was $39,451.

Even with an important building program on the agenda the church scheduled a series of revival services to be held on the Sunday evenings in January 1910. Guest speakers were provided with board and lodging at members’ homes.

The last services in the original building were held on April 3, 1910. The Reverend Moffett administered the sacrament of communion at the morning service. In the evening there was a commemoration service, with addresses by the pastor and the officers of the various departments of the church.

The Deacons of the First Presbyterian Church had graciously offered the use of their building, “in so far as such use will not interfere with the present appointments of the First Church.” However, the Board thought it best not to inconvenience the members of another congregation.

The following Sunday, April 10, the first services were held in a temporary structure erected on the rear of the lot at 25 Vandeventer Avenue, which came to be known as the Plank Chapel. Pews from the old church building had been arranged in a circle, and the Reverend Henry Belting, who had served the church from 1872 to 1874, preached at the evening service. On October 25, 1910, Mary Elizabeth Pierson and Van Buren Leigh became the only couple to be married in the Plank Chapel.

On April 20 workmen began to raze the former church building. At the same time the frame house on the corner lot was moved to 25 Vandeventer Avenue where, with an extra room and added exterior embellishments, it still stands today.

The cornerstone contains names of all who contributed toward the building, a copy of the Discipline of the Methodist Episcopal Church, a copy of the Princeton Press, a list of members of the University faculty, and a history of the church.

When the basement was completed on December 11, 1910, the congregation began meeting there. The cornerstone from their old building had been placed in the stairwell entry to the basement, where they could view it as a reminder of their beginnings. The white marble stone which had been inscribed, “Methodist Episcopal Church, Founded A.D. 1847. ‘What hath God wrought,'” now bore the additional inscription, “TABLET FROM FRONT OF OLD CHURCH ORIGINALLY ON THIS SITE.”