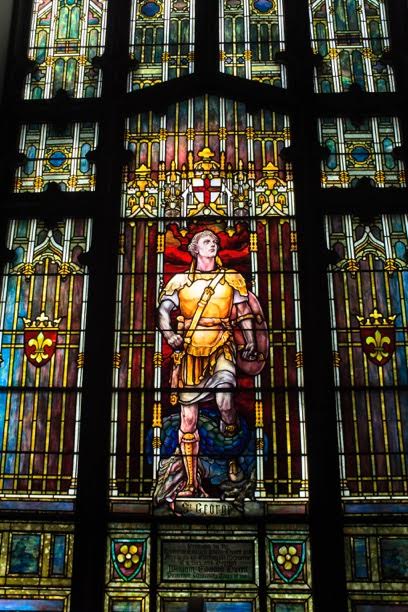 This is the twelvth in a series of excerpts from “A Journey of Faith for 150 years: A history of the Princeton United Methodist Church” by Ruth L. Woodward, Copyright 1997.

The Tiffany window to honor Eddie Durrell and many memorial gifts dedicated in 1911; the Ivy Caper

The new building was finished with Port Deposit granite laid in broken range, in a design referred to as perpendicular Gothic. The interior finish was of hard wood, with quartered oak pews and matching pulpit furniture. The light fixtures were a combination of gas and electricity, known as gasoliers, used in most public buildings of the time. A light bulb could be screwed into the bottom and there was a gas jet on top to be used in emergencies. One of these fixtures still remains in the Vandeventer Avenue entryway of the church (as of 1997). There was a lawn on the space now occupied by the education wing, and it was still considered necessary to build a row of horse sheds across the back of the lot.

The jewels of the building were, and are, the stained glass windows. The magnificent window in the facade of the sanctuary, depicting St. George and the dragon, was the gift of the Reverend Edward Hicks Durrell and his family, in memory of a deceased son and brother, William Edward Durrell, who was a Princeton graduate of 1889. Eddie Durrell died in Italy in 1891 and was buried in the Protestant Cemetery in Rome. Because he was the youngest member of his class, and the first to die, his classmates arranged for a flat marble slab to be erected on his grave as an expression of their love and esteem. The family was probably happy to have an opportunity to provide a memorial of their own. 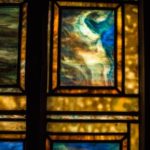 Can a Methodist minister afford a Tiffany window? In this case, yes. The elder Durrell spent most of his ministry in churches in the southern part of the state. While serving at Tuckahoe he bought his first cranberry bog. This was the start of a growing and successful business that he carried on as a sideline, and he eventually became one of the largest cranberry growers in the state. 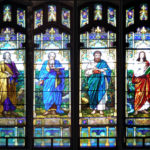 The windows on the main floor of the sanctuary depicting the four Evangelists were gifts of members of the local congregation. There are two unusual things about this set of windows. First, the Evangelists are not shown in the usual sequence of Matthew, Mark, Luke and John. Instead Luke presides over the choir, with Matthew, Mark and John following. This order is said to have been insisted upon by the studio artists, because they felt this color sequence of the robes was preferable. (??)Second, John does not fit in with his contemporaries. The donor of the window refused to consider the design submitted by the studio, pointing out that John was a young man and she wanted him depicted as such. Though unsigned, these windows came from the Lederle Studios*, as did the one in the Sanford-Davis Room.

There were many individual memorial gifts, most of which have disappeared or been altered in the course of various redecorating projects. Plaques on the sanctuary walls commemorate individuals who gave unstintingly of their time to the building of the church. On the west wall we can read: “In Loving Memory of / Archer Brown / Charter Member of / The Advisory Committee I For the Building of / this Church / his sons: Archer Hitchcock Brown and / Lowell Huntington Brown by their I subscription have helped build this church.” There are two plaques on the east wall. One reads: “In Memory of ; Bishop Henry Spellmeyer, D.O. / Who Died While Presiding Over the / New Jersey Conference; in March 1910/ His last public address was an / Eloquent Plea in Behalf of this Church, / Followed by a Contribution towards; the Building Fund.”

The second honors the work of the pastor. “In Honor and Appreciation of / our Pastor / Rev. William W. Moffett, 0.0./ who, in the erection of this edifice,; witnesses the fruition of ; eight years of ceaseless effort I to advance the interests of the Master’s Kingdom; in this Community.”

The membership of the church placed two plaques in the narthex: “in honor and appreciation of M. Taylor Pyne who gave the westerly part of the lot upon which this edifice stands” and “in honor and appreciation of Mr. and Mrs. Charles H. Sanford whose generosity made possible the erection of the present edifice and who made a further gift of a special endowment for its permanent preservation.”

However, there was one gift of the Sanfords that not every member of the congregation appreciated. Returning from England one year, Mr. and Mrs. Sanford brought some shoots of ivy from John Wesley’s home at Epworth to present to the Princeton church. One member of the congregation obtained from the university some nails imported from France, especially designed with an L -shaped arm so that ivy could be trained along a wall without the necessity of tape or twine. Some people thought it quite appropriate, and indeed, very special, to have this direct connection with the founder of Methodism. Others thought that the ivy would harm the pointing between the stones.

A large portion of the membership lived close enough to walk to their jobs on Nassau Street or the campus each morning. A member of the anti-ivy constituency would take a moment on the way to work to pull the vines from the wall. A pro-ivyite following would carefully train them back up the wall. These actions were repeated at the end of the working day, and there were some people who went home for lunch, passing the church four times a day. The problem was soon solved when the ivy died from too much attention.

But this was in the future, and everyone was jubilant on the day of dedication. Wednesday, October 11, 1911. District Superintendent Alfred Wagg presided, with Bishop Joseph F. Berry of Buffalo preaching at the morning service and dedicating the church. There was a reunion in the afternoon to which former pastors and members had been invited. Thomas O’Hanlon, who had served the church from 1861 to 1863, presided, and a number of the former pastors spoke. At the evening service both the Bishop and the District Superintendent gave addresses. On Saturday, October 14, Bishop John W. Hamilton lectured on “Some People of Quality at Boston.” On Sunday, with Moffett presiding, Bishop Hamilton spoke in the morning and the Reverend James M. Buckley, editor of The Christian Advocate, in the evening. Music for the services was provided by a chorus choir under the direction of William Christie, with solos by Miss Grace Robinson and Miss Ruth Tolson Mershon.

A recollection of these special events is that “general rejoicing filled the hearts of a grateful and naturally -and properly so proud people.”

*Later an expert said that the Gospel Writer windows were not by Louis Lederle. And, since the same windows can be seen in Germany in the Cathedral at Cologne, it is not likely that the donor could have dictated the aesthetics of the window of John).