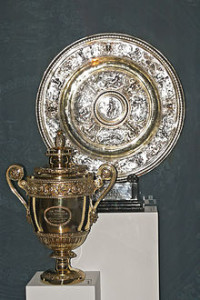 On the day before the U.S. Open began, Rev. Jana tapped a tennis topic for the  “Stories That Change the World” series. She described the Venus Rosewater dish, made in 1864 and inscribed with mythological figures. The woman who wins first place at Wimbledon gets to hold the trophy and receives a replica plus $1.4 million. Jana went on to name other sports trophies for, for instance, the Indy 500, the Boston Marathon, the America’s Cup, and the PGA Masters in Atlanta.

The text for her sermon involved several parables of Jesus from Matthew 13:34-35 and Matthew 13: 44-52, the ones about the hidden treasure in the field and the pearl of great price. Are we pursuing the Kingdom of God as if we were trying to win the America’s Cup, she challenged. “What is your Venus Rosewater dish?”

She cited A.J. Jacobs, an editor at Esquire, who threw caution to the winds and spent a year trying to live according to the Bible. For Jacobs, who has a Jewish heritage, that meant not shaving and not wearing clothes of mixed fiber. He wrote about it in The Year of Living Biblically.

As Christians we can challenge ourselves to be more grounded in our faith bit by bit. By taking time for thanking God every morning. Or by trying to live our lives according to the Sermon on the Mount. Or — as Ken Morrison sang this morning in an anthem that he wrote himself —  “I want the mind of Jesus in me…I want to share his faith and live his hope so everyone can see…”

As for the Wimbledon trophy — do you think it’s possible that a certain five-time winner of the Wimbledon women’s singles title was named after it?