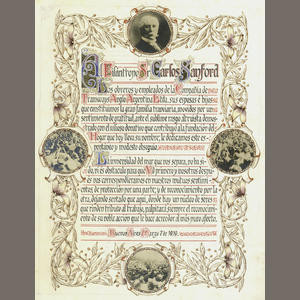 The Sanford Davis room at Princeton United Methodist Church hosts everything from after-church coffees to community meetings. Who was it named after, anyway? Charles H. Sanford made quite a lot of money — $1 million was a fortune in Victorian times — and did good things with it. The book, pictured above, is a “tribute volume.”  given to him in thanks by the orphanage he founded in Argentina. In June, 2013, it sold at auction for $542.

Charles H. Sanford was a Presbyterian. but his father was a Methodist, a country doctor. In the late 1800s Princeton United Methodist church met in a building much smaller than the present structure. Entreated by his father’s former pastor, Charles Sanford donated $10,000 toward a larger building to be erected in 1910.

Sanford had visited Cuba when he was a teenager in order to learn Spanish and he parlayed that knowledge of the language into a fortune. At age 25 he joined an American bank in Argentina and according to a New Zealand newspaper, made $1 million. The newspaper said he was a “Yankee drummer for the sale of pills and toilet preparations.

However, in the history A Journey of Faith for 150 Years, written by a PUMC member, the late Ruth Woodward, he was also a banker.

Woodward writes: “The Republic of Argentina was still quite young and Sanford arrived on the scene as a banker in time to help finance the growth of both the country and the city of Buenos Aires, which was little more than a village when he arrived. He accumulated a vast fortune in the process, owning thousands of acres in the city. He was noted for his philanthropy in Buenos Aires, especially as the founder of a home for children.  Able to retire at an early age, he spent most of his time in London, with several months of each year in Freehold.”

Sanford family bequests include the bell tower, the bells, the triple window of Christ blessing the children, and the windows in the Vandeventer Avenue entry.

As for the Davis part of the name, B. Woodhull Davis was “an active and faithful member of the church,” wrote Woodward. According to a 1938 newspaper, he went to Wesleyan College, Class of 1919, had a master’s degree from Columbia, and came to Princeton as principal of Princeton High School in 1929.