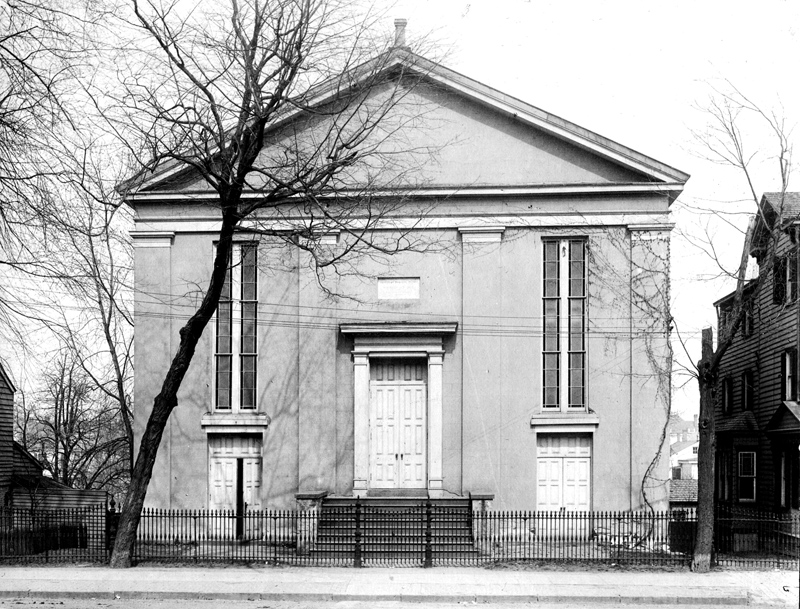 This is the fourth in a series of excerpts from “A Journey of Faith for 150 years: A history of the Princeton United Methodist Church” by Ruth L. Woodward, Copyright 1997.

With a full-time minister in Princeton, a number of the Cedar Grove Methodists had joined this congregation. On May 30, 1856 their chapel was purchased for $400 by the philanthropist Paul Tulane, the founder of Tulane University, who had been born and raised in the Cedar Grove community. He maintained the building as a community chapel for thirty years, with ministers from the Princeton Methodist and Presbyterian Churches, the Dutch Reformed Church of Blawenburg, and the Baptist Church of Hopewell alternating in conducting Sunday afternoon services. Eventually Tulane conveyed the property to the First Presbyterian Church of Princeton. It later passed through the hands of several private owners, before being razed so that the glass and lumber could be used in renovating the old schoolhouse into a residence.

Joseph Ashbrook was succeeded by Israel Saunders Corbit, who was thirty-two at the time of his appointment to Princeton. Corbit’s oratory was said to have been brilliant enough to attract not only townspeople to the Methodist services, but a number of the seminary students as well. He increased the membership with more than 150 new members and probationers, including over fifty adult baptisms. However, he must also have been an extremely strict disciplinarian. Several members were removed from the church rolls because of their failure to attend class meetings regularly, including Dr. Bartine who was the president of the Board of Trustees (editor’s note, he had purchased the land for the building as the ‘shell buyer’ and was the son of a previous pastor of this church!). Apparently a doctor’s busy and unpredictable schedule was not sufficient excuse for the Reverend Corbit. Bartine joined the Methodists who were meeting at Cedar Grove, and with true Christian forgiveness transferred his membership back to Princeton when Corbit was succeeded by the Reverend Samuel Monroe.

Corbit began the systematic keeping of church records. The first infant baptism that he performed was for six-year-old Louise Marion Mershon in June 1849. The first adult baptisms on September 23, 1849, were fourteen-year-old William Vandewater, and Catherine Leggett, the wife of William Leggett, who served faithfully as church sexton for many years, in spite of seldom receiving his salary on time. The first wedding Corbit recorded is that of Dr. Oliver Bartine and Mary Cottrell on May 21, 1850. Miss Cotrell lived on Cottrell Lane, which has since become Moore Street. That year Corbit also presided at the wedding of Emily Young and the Reverend Aaron E. Ballard, who was to become pastor of the Princeton church in 1852.

The trustees held many of their meetings at Dr. Bartine’s office and were kept busy checking proposals for carpentry work and plastering the interior of the church. Apparently there was no general-contractor and payments were made for bricks, stone, sand, etc. as work progressed. In May 1849 the trustees resolved to “proceed to finish the Church as soon as practicable.” Decisions were made that the seats were to be continued against the walls on each side and the walls would be wainscoted; iron columns would support the galleries if the cost were not too much. Everything needed to be in good order for the dedication of the building on October 17, 1849,

Corbit aimed high in seeking a speaker for the dedication service (in 1849). On September 24 he wrote to the Reverend Stephen Olin, President of Wesleyan University in Middletown, Connecticut, inviting him to be present for the occasion. Olin had previously taught at Franklin College in Athens, Georgia, and had served as president of Randolph-Macon College in Virginia. A noted orator and one of the well-known Methodists of his time, he was instrumental in organizing the Evangelical Alliance, one of the earliest ecumenical organizations. As president of two Methodist colleges he tried to arouse the denomination, both clergy and laity, to the importance of higher education. He was one of the few Methodist ministers of his time who believed in theological training for the clergy.

For more than 20 years, efforts were made to establish Methodism in this town, but without success: the great difficulty in the way was the want of a suitable place in which to hold public services; for so great was the prejudice existing against our church, that no such accommodations could be procured. However, that difficulty has been finally overcome. Our Conference at its Annual Session held in April 1847 Resolved to build a House here, and pledged itself to raise by the personal efforts of its members the sum of $3000 toward the enterprise. After tailing hard from that time until the present, we have succeeded in the erection of a neat brick edifice 48 by 65 feet at a cost of $6000. Our debt on the day of dedication will be about $1600; the greater part of which we hope to raise on that day. . . .

Princeton is one of the most beautiful and flourishing towns in our state: occupies a central position on the line of the Rail Road between New York and Philadelphia. It Contains a population of 4000 souls. For more than one hundred years, this Community has been controlled by Calvinistic influence. The Presbyterians have laboured zealously to exclude all other denominations, and especially have their efforts been directed against Methodism: they have represented our beloved Church as being a compound of ignorance and enthusiasm; but by the blessing of God we have overcome these prejudices to some extent, although we have much even now with which to contend.

You are doubtless aware of the high Literary Character of this place, and this fact renders it very desirable that a Man of Renown and acknowledged Literary acquirements should dedicate our Church.

Unfortunately, no records are available to tell us what happened at the dedication, but it seems certain that Olin did not participate. His 1849-50 Annual Report states that he had become ill shortly after the 1849 commencement, making it impossible for him to attend to his duties until the end of the fall term. We can only hope that Corbit was able to obtain the services of an equally eloquent orator and that it was a beautiful autumn day in Princeton, with the trees a riot of color. The only traffic noise from Nassau Street would have been the sounds of a few horses’ hooves. The congregation had already chosen “What hath God wrought,” as the inscription on the cornerstone, and this thought must have been much in their minds that day.

Corbit’s optimism about raising enough money to payoff the final construction costs was ill founded. In the spring of 1850 it was resolved that “the trustees approve of the females get up a fair to help in Liquidating debt of church.” The fair was apparently a success since part of the proceeds helped to payoff an outstanding note, and the remainder of the proceeds were left at the disposal of the fair committee to be used for the benefit of the church. In April of that year Conference removed Princeton from the status of Circuit and it became the Princeton Station.