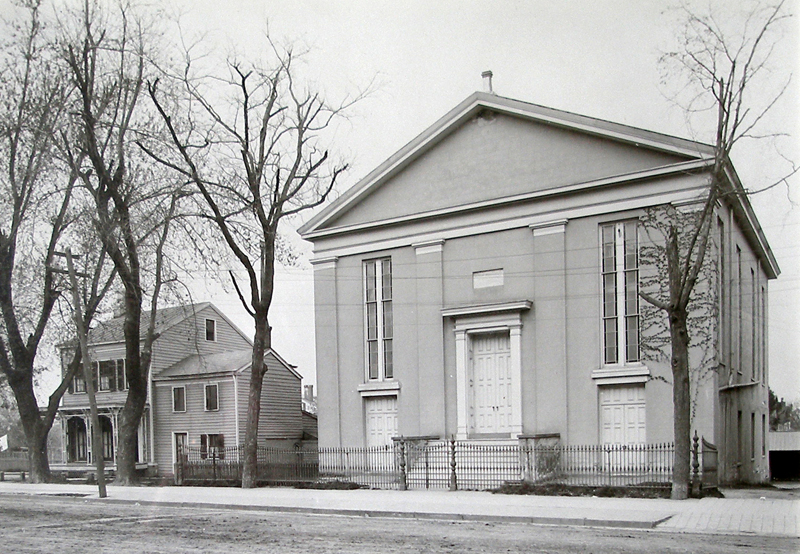 This is the fifth in a series of excerpts from “A Journey of Faith for 150 years: A history of the Princeton United Methodist Church” by Ruth L. Woodward, Copyright 1997.

Times were changing fast, the Princeton Gas Light Company was organized in 1849, and in March 1852 it was determined to have gas in the church “if Practicable.” In September 1855 the street commissioners were asking that the trustees pave the walk in front of the church. An appeal to the Common Council managed to delay this action, since it was not until June 1857 that a committee was appointed to supervise the laying of the pavement, and the work was not actually done until September 1858.

The fall of 1855 also saw a decision to purchase a furnace for the purpose of warming the church and to purchase shades for the gas lights. When Susan Voorhees was admitted as a probational member in 1855 it was an unusual event for that time and it was considered necessary for membership records to describe her as “Colored.” She was admitted to full membership on January 2, 1856.

Pew rents were difficult to collect and there was a constant need for extra money. In May 1856 there was a plan to secure speakers to lecture for the benefit of the church, and in July of that year it was decided to rent out a room in the basement of the church. In October receipts from a Harvest Home helped to replenish the treasury. The following spring $200 was due on a $1,000 mortgage, and the treasury was $7.00 short of meeting the required amount. A committee was appointed to borrow this amount.

In 1857 horse sheds were to be built in the rear of the church lot for all members who wanted them and were willing to pay for them. Two years later Dr. Bartine was given permission to cut a gate in the fence between the church and his property, he having purchased one of the sheds to use during the week, the church to have the use of it on the Sabbath.

The Reverend George Batchelder, who served the Princeton church from 1857 to 1859 seems to ‘have been a particularly charismatic young man. Only twenty-one when he was appointed to this church, he was described as “one of the most eloquent men of American Methodism,” attracting large crowds whenever he preached. Always in frail health, he became ill enough in 1862 to be granted the superannuated relationship by Conference. After travelling west in the hope of improving his health he returned to Princeton with his wife, the sister of Oliver Bartine. He died the following year, probably of tuberculosis.

In spite of a constant scarcity of funds the trustees did their best to keep the church building in good condition. In 1858 the basement was painted and whitewashed and new curtains procured for its windows. The upper floor of the church was painted and a railing and platform built for the front of the pulpit. The following year a second bridge was built in front of the church; i.e. , a connection from the sidewalk to one ‘of the lower entries.