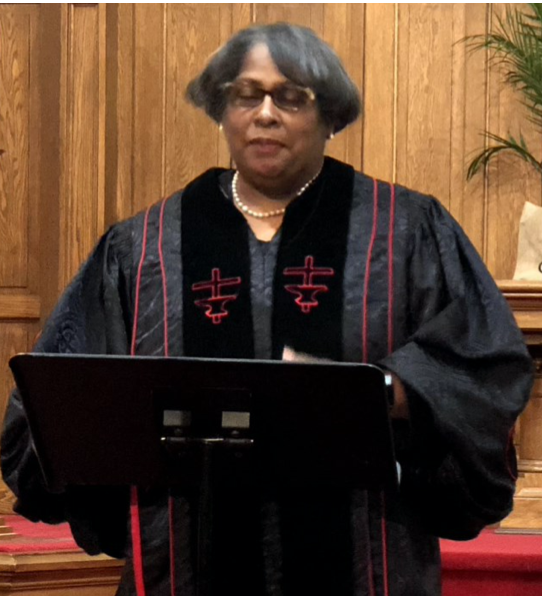 What a joy it was to welcome Rev. Dr. Deborah Blanks, pastor of Mt. Pisgah African Methodist Episcopal Church, as guest preacher on April 25. “If there is a temptation to be someone other than ourselves, that would be a monumental mistake,” she said, preaching on the Good Shepherd theme in the Gospel of John. “God wants us to be the people that God has redeemed us to be.”

Her inspirational message represents a step toward a partnership that Princeton UMC is developing with Mt. Pisgah AME, located on Witherspoon Street. This project was sparked by Professor Emeritus Albert Raboteau, in answer to the question, “What can (one) do to help improve race relations?” shortly after the racially charged events at Charlottesville, VA. His answer was, “Sit down together and share a meal.”

“We proceed in that spirit of fellowship,” says Dana Dreibelbis, who co-chairs the project – a Juneteenth celebration picnic — with Rev. Dr. Blanks. Brenda A. Allen, president of Lincoln University, the oldest of the HBCUs (Historically Black Colleges and Universities), is a consultant on this effort.

Juneteenth is celebrated around the nation as the day (June 19, 1865) when freedom for enslaved people was finally and belatedly announced in Galveston, Texas, by Union authorities. Celebrations began the following year mainly as church-centered events and have evolved ever since.

PUMC will join Mt. Pisgah AME for the Juneteenth celebration picnic on the actual day, Saturday, June 19, at noon (Covid conditions permitting). Space has been reserved at Community Park South, and Rev. Dr. Blanks and Dana are assembling a volunteer team.

As United Methodists we have so much in common with the African Methodist Episcopal Church. According to the A.M.E. website, it split from the main branch of the Methodist Episcopal Church in 1787, not because of doctrinal differences “but rather the result of a time period that was marked by man’s intolerance of his fellow man, based on the color of his skin.” It has grown from one church in Philadelphia to gaining members in 39 countries on five conti- nents.

President Allen suggests the Juneteenth project can “ultimately provide opportunities for diverse groups to build relationships towards the common goals of learning about each other and to come together to fight racial injustice. We agreed that this is not a one and done. Rather we envision a series of activities that bring communities together to build these relationships and develop cross-cultural trust and respect.”

“To this end we envision events throughout the year to keep the goal of genuine equality, respect and fellowship front and center,” says Dana.

Can you help? Email danadreibelbis@gmail.com .